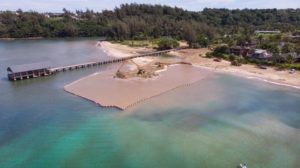 Four months ago, an historic flooding wreaked havoc in Hanalei. We received a historic 50″ of rain in April which quickly washed away a lot of Black Pot Beach, at Hanalei Pier. As part of the disaster, the heavy rain washed away a huge part of Black Pot Beach. A report from the Department of Public Works was issued in July. It shows that the major damages to the area are: the erosion of Weke Road & Black Pot Beach and the destruction of the ‘Comfort Station’.

The county continues to salvage the ruins. One such rehabilitation area is the plan to revamp the Black Pot Beach Park.  A University of Hawaii study showed erosion at Black Pot Beach of up to 12 feet in some areas and that April’s flooding eroded 70,000 cubic yards of sand in the area. This was recently quoted in the Garden Island News Paper. The project is to bring the sand and fill in the eroded areas. – such as the Black Pot Beach pier and Weke Road.

This project seeks to put ‘Black Pot Beach’ on the map again!

One neighbor says “If no action was taken, we wouldn’t be able to access the pier or Black Pot.  I’m glad they are trying to give us our pier and park back. They are attempting to bring the sand back around the beginning of the Pier and then also back to black pot so that area is accessible and can be “black pot” again, hopefully, In the process, it will be deeper at the end of the pier and maybe we can jump off it again someday.”

Known as the ‘Emergency Declaration Funding’, the project is only for repairs rather than redesign. The first stage of the project is dredging of the Bay, which is currently underway and is illustrated in the images. Estimated at about a million dollars, predictions show that the project is due for completion in the last quarter of 2019.

Furthermore, the repairs should withstand further devastation in the future. As Weke Road is the only land route to access the Beach Park, rebuilding the road will involve dredging of sand from the bay. Afterward, the area will be erosion-proof by adding a layering of geo-fabric and rocks that can give such resistance.
Erosion is fast becoming a threat to life and properties, we must curb erosion! The mechanism of erosion results from the constant changes in the rising of the sea level.

Photo Terry Lilly, Barriers to keep silt from moving into the ocean float
near the pier in Hanalei Bay, part of the ongoing construction project on Weke Road.

“The yellow barriers around the dredging site are silt curtains, and their purpose is to minimize silt migrating out of the work area,” said Lyle Tabata, acting county engineer.

I interviewed a long time resident recently. He said: “Erosion is a natural occurrence and so is rising water, however, it’s actually very complicated. The river is a living phenomenon, which moves from time to time, there are many factors, including; current Buffalo farm, the wetlands prior, there were taro and rice before that, water was always welcome then. Another factor is that the Hau bush prevents erosion on the side which it is growing, yet constricts the river and pushes the water to the other side (where it is not growing). The river used to be 50″ wide and now it’s 30″. Nature and people have changed the terrain. Surf season will definitely change the terrain once again.” 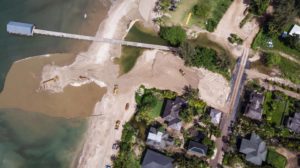 From time immemorial volcanic islands wash down into the sea. Hanalei Valley is an uplifted coral reef, covered by mud from mountain erosion. Every heavy rain brings down more layers of mud. Ancient Hawaiians, never really lived full time on the beach, it was the ‘beach house’.

The rebuilding project has begun in order to restore peace, tranquility, and beauty to the region. The changes in the floodplains of the Hanalei River are under corrective procedures to preserve what once looked like Hanalei.

Kauai is an amazing place and we need to have more people helping to make real (positive) change.  Participating in the process is important and we can all do more to help.

The good news is if you would like to help, you can. “Hanalei Initiatives”, is a group of people committed to identifying challenges and completing solutions to Hanalei’s most pressing problems. We are community driven and supported, and we work in partnership with government.

We are building the first Public Playground in Hanalei in over three decades, click here to help.

DIY Hanalei Day Spa… At your home!
How you can help build the Hanalei Playground!

Ready to schedule your appointment? 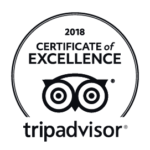